July 09, 2019
With the recent referendum in BC on electoral reform, which resulted in not only a defeat at the polls but also an abysmal voter turnout at 42.6% of eligible votes, there have been some renewed calls for policy decisions to be reviewed by a random assortment of voters through something like a Citizens' Assembly. A citizen's assembly would be an alternative, or a complement, to a public vote on a matter of public policy such as electoral reform; rather than putting the matter directly to the public, a random group of citizens would be selected and convened to give their opinion.

Further, over the course of the referendum, other important questions were raised about the process itself: what's a sufficient voter turnout to inform a policy decision? Shouldn't the ballot include the specific details of the voting system being proposed? 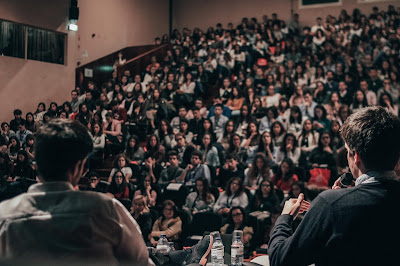 All of these questions serve as an important reminder of why democracy entails much more than showing up at a poll booth to submit a vote. Arguably, with a response rate below a majority of eligible voters, the validity of the vote on the referendum could be called into question. But what is a sufficient participation rate for democratic decision-making? Are there times when a random selection of citizens should be convened to provide an opinion on a matter of public policy?

One thing is clear: citizen assemblies do not constitute representative samples of the population - they are not reflective of majority opinion. Which begs the question - from the standpoint of democratic legitimacy, when are they appropriate?

The short answer: when it's important to have individuals without a party affiliation or explicit political agenda research something in detail, give it thoughtful consideration, and develop informed solutions or policy proposals. In contrast, if you're looking for a definitive answer about a particular question, wanting to gauge opinion, and reinforce the democratic principle of 1 person = 1 vote, then you will want to strive for equal representation through a statistically representative sample.

Aitamurto, Galli, and Salminen (2014) contrast these two approaches in this wonderful table: 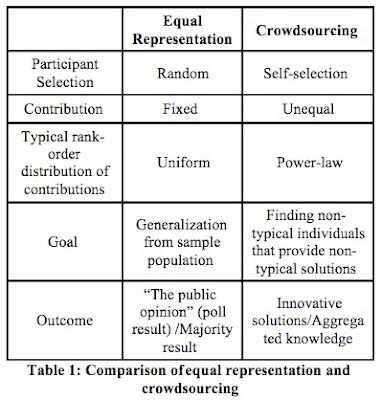 Their paper is a terrific outline of the key features of effective crowdsourcing efforts. To some extent, good crowd-sourcing compromises the principle of 1 person = 1 vote; you're looking for the best ideas from whoever has them, and participants self-select. This means the most interested individuals may be the ones participating, rather than a broad group of equally represented population groups.

So if you're looking for an idea that is new, innovative, and captures the best thinking - something like a citizen assembly or crowdsourced option might be best. However, if you have a particular policy proposal, and are looking for an authentic gauge of public support to make a final decision, be sure a representative sample factors in.

In the case of the BC referendum on electoral reform, perhaps it would have been preferable to have the 'crowd' come up with innovative and different possibilities for electoral reform, before taking a representative sample poll by way of a referendum.

Table 1 is from the research paper: Self - Selection in Crowdsourced Democracy: A Bug or a Feature? 2014: https://www.researchgate.net/publication/284727527_Self-selection_In_Crowdsourced_Democracy_A_Bug_Or_A_Feature