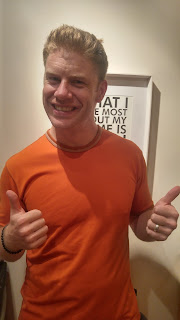 I really like the colour orange, and orange shirts. But what if a majority of the people in my life wanted to stop me from wearing orange, and decided to take a vote of those who were opposed to ever allowing me to wear orange again? What would I do!?

In the last post I made brief mention of the possibility that, under majority rules, decision-making could result in a tyranny of the majority. This can occur anytime there is a minority (which is pretty much possible all the time) who do not have the sufficient numbers to influence decisions under this approach (majority-based decision-making). In this scenario there is no incentive for the majority to take into account opposing views. Those who find themselves in the minority will have their needs and desires rejected, ignored, or worse, oppressed.

To put it bluntly - a group could decide it's not cool to wear orange anymore, and to put in place a law whereby anyone caught wearing orange would be imprisoned. All they would need to do is get majority support. What would stop this from happening?

This fear has been held by political theorists as far back as Aristotle, including John Stuart Mill and Edmund Burke more recently, and the architects of the American Constitution: Madison and Hamilton. Simply put: vesting complete and unequivocal decision-making power with the majority yields the very real possibility of a tyranny of the majority. Avoiding this pitfall becomes a question of balance. How do we balance the desire for democratic decision making with restraints, rules, or limits that will avoid a tyranny?

Hamilton and Madison put forward the concept of 'checks and balances', and practices such as the Electoral College, to try and mitigate against a tyranny of the majority in the United States. But are there other approaches to avoiding this challenge, when faced with a situation in which a vote is required?

In Canada the Charter of Rights and Freedoms, and an unelected independent judiciary, are intended to serve this purpose. When it comes to the Charter, no group, no matter how much support they get, can infringe upon the enshrined rights of any person or group. Even if a political party wins majority support, they cannot make decisions that compromise basic rights. Groups that do find their rights have been compromised have very specific recourses for action.

If you are charged with leading a decision-making process, what recourse do you offer participants who have issues with the the process, or the ultimate outcome? Is there a feedback mechanism? Some kind of check or balance against the possibility that the majority will ignore the perspective of some specific segment of participants? These are important questions to contemplate before you launch into a decision-making process. Here are some ideas.

What ideas and practices have you tried out to avoid a tyranny of the majority? If I was a member of your group, would I be able to keep wearing my orange shirt?