August 22, 2017
You're a decision-maker, with some institution or organization, and there's an issue or project where you want to consult with members of the public. How can you get their input in a way that will be meaningful, in a process that will feel inclusive and collaborative? If the issue is contentious, and you want to gather input without delegating your authority to make the final decision, how can you engage participants in a way that won't feel completely disingenuous?

This is no small task, and is the subject of much research, training, and deliberation amongst public participation facilitators and consultants. More often than not, efforts at public participation are a disaster. Participants can feel as though their input is not considered seriously, are frustrated that their proposals and feedback are not adopted, and practitioners are left with more information than they know what to do with. At worst, trust in the institution itself is eroded.

Trust in the public realm is a growing problem, with current studies reporting that trust in public institutions is in decline. At best, a solid process to include the public in decision-making can increase trust and support for your work.

There are a lot of dimensions to designing and implementing an effective public participation process (for resources and training on the topic check out www.iap2.org). In this post I'm only going to focus on one key consideration: how and whether participants should interact with each other. One of the key failures of many efforts at meaningful public participation is not allowing participants to engage with one another. The institution solicits feedback from each participant, one on one, independent of feedback that is received from other participants. This is depicted by the drawing on the left: 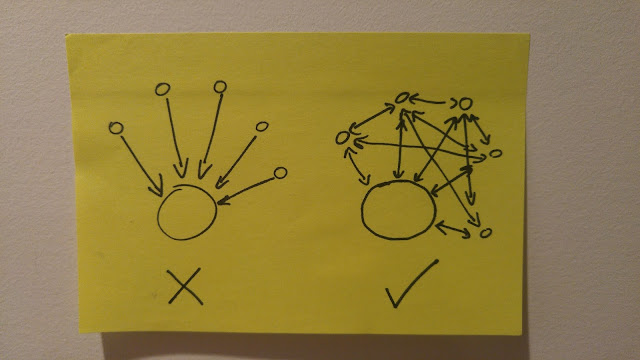 It's far more meaningful, effective, and ultimately collaborative, to equip participants with the opportunity to connect with one another, as well as the institution, through the process. This is depicted by the drawing on the right hand side. Enabling this will empower participants to challenge one another, to adjust their own perspectives, and to explore and reveal new insights about the issue. This is not possible when feedback is collected from participants who are silo'd from one another.

This kind of interaction can be achieved via discussion groups, focus groups, world cafes, or even short term task forces or committees. Irrespective of the outcome of the process, participants can build relationships and learn new things about themselves, their community, and public issues if they can interact with one another through. In addition, this approach gives you, the decision-maker, a kind of filter or initial review for feedback from the public. If each person submits their feedback directly, you are left sorting through massive amounts of input. If, however, participants can review proposals and suggestions from one another, and agree on key principles or concepts to provide as feedback, then they are beginning the review process for you, and refining the items that get put forward as public input.

So let people talk to one another, and be up front with whether and how you'll be using their feedback in the decision-making process. For a great spectrum when it comes to public participation in decision-making, have a look here.